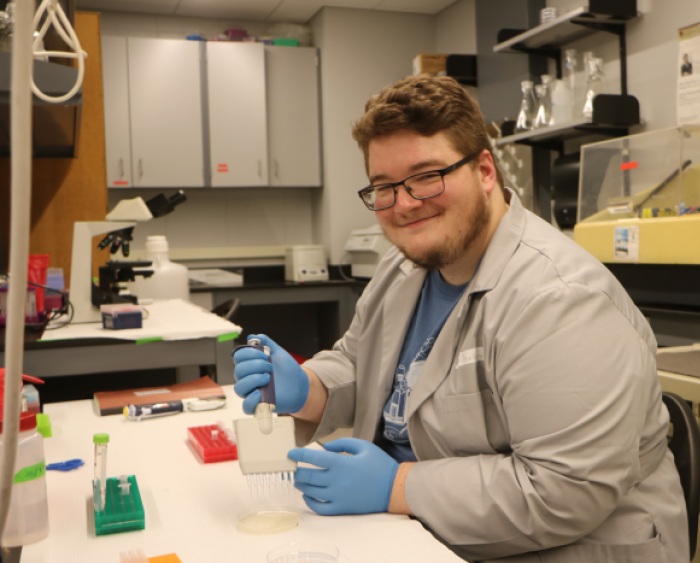 Ryan Osselborn ’23 started his research career in earnest the summer of 2021. With less than a year of high-level research experience under his belt, he thought applying for grants and scholarships to help fund his research would be a long shot. However, in the space of one week, Osselborn was notified that he had been awarded two separate recognitions that will help propel his research and career beyond Lake Forest College.

Osselborn, majoring in neuroscience as well as biochemistry and molecular biology, was recognized as a 2022 Goldwater Scholar in addition to his selection as a recipient of a Parkinson’s Foundation Summer Student Fellowship. The Parkinson's Foundation research grant is typically supplied to medical students or undergraduate students from much larger research national and international universities, making Osselborn's recognition especially notable.

“Being able to show that I wrote a successful grant proposal as an undergraduate student shows that I am serious about research and that I have the experience to be able to take research on in the future, whether it be graduate school or later on down the road,” he said.

The Parkinson’s Foundation grant will enable Osselborn to pursue his senior thesis, which intends to compare a family of three proteins, one of which has been directly implicated in diseases such as Parkinson’s and has been highly studied. The other two proteins have not been as closely monitored, and Osselborn hopes to explore the neurodegenerative potential those proteins might have in diseases like Parkinson’s or dementia with Lewy bodies.

“To have been granted funding from the Parkinson’s Foundation is an honor that will have significant influence on my research because it helps support my work,” Osselborn explained. “The thing that I’ve learned over the past six months working in Dr. DebBurman’s lab is that science is expensive. Getting proper funding to be able to support projects like my senior thesis is vital to our success as a lab.”

"I am so excited that Ryan has received this prestigious national-level grant," Professor DebBurman said. "I think one reason Ryan stood out is that he will explore a novel question about the potential of two proteins to contribute to neurodegenerative diseases by modeling their properties in a powerful yet unconventional model organism yeast. Anything he discovers will be interesting and extend the field. Secondly, he has a superior grasp of the scientific problem and he is an excellent scientific communicator who has designed appropriate and well-controlled experiments."

“I’m unbelievably proud and thankful to have been awarded the Goldwater Scholarship. It feels fantastic to have my passion for research be recognized in such an amazing way. This opportunity will open new doors for me on my journey into graduate research,” Osselborn said.

After graduation, he hopes to pursue a PhD in biomedical sciences: “I would like to conduct research on novel biomarkers of neurodegenerative diseases, like Parkinson’s disease, to identify new ways of earlier diagnosis for patients. Normally, by the time symptoms appear, the damage is already done to the brain. In some cases, you can’t even diagnose these disorders until after death through autopsy. Being able to discover some form of biomarker to be able to detect these diseases early on would possibly allow us to start treatment or find a different way to approach the disease to improve quality of life for patients in the future.”

The Goldwater Foundation’s press release stated that 417 college students across the United States were awarded the scholarship from an estimated pool of over 5,000 sophomores and juniors. “The Scholarship Program honoring Senator Barry Goldwater was designed to foster and encourage outstanding students to pursue research careers in the fields of the natural sciences, engineering, and mathematics,” according to the press release. “The Goldwater Scholarship is the preeminent under-graduate award of its type in these fields.”

Osselborn, a first-generation student, is grateful for the support he receives at Lake Forest: “As a non-traditional student who actually dropped out of high school, I feel immensely thankful for the opportunities that Lake Forest College has offered me that have led me to push my boundaries and grow as a student and as a professional. The robust resources at the College, like the support and mentorship of experienced professors like Dr. Conrad and Dr. Wentworth as well as advising from the Career Advancement Center, have allowed me to get to this point.”

He has also been supported by Professor DebBurman throughout the application process. “First and foremost, I would absolutely have to thank Dr. DebBurman. He has been my research mentor since I started in the summer of 2021. He is the one who originally suggested both opportunities. I struggled a lot in the beginning with convincing myself I would be competitive, but Dr. DebBurman consistently and patiently provided support and advice,” Osselborn said.

"The Goldwater has long been held as the most prestigious and competitive scholarship in the nation for students that plan to pursue PhDs in STEM fields," Professor DebBurman said. "As his academic and research advisor, I am absolutely delighted but not surprised that Ryan was selected because he has an outstanding academic record, strong research credentials, and his strong sense of purpose to pursue a research career focused on fighting a devastating human neurodegenerative disease by understanding its complex mechanism and finding biomarkers for treatment easily comes through."

The College has had three Goldwater Scholars and two honorable mention since 2001. This year, out of 15 Goldwater Scholars chosen from Illinois, Osselborn is the only student from a small college. Out of 14 colleges in the Associated Colleges of the Midwest (ACM) consortium across five states, he is one of only two selected.

Osselborn's advice to fellow students aspiring to similar achievements is to give every opportunity a chance. “I questioned whether I was right to apply for these opportunities. I had a lot of imposter syndrome and didn’t believe in myself. It was through the support of my mentors and my peers in the lab that I was able to start seeing myself as others do and finally acknowledge that I’ve grown a lot in a short two years,” Osselborn said. “If you’re given the opportunity to do something like this in the future, I say just jump in feet-first and cherish the experience. Whether you get awarded or not doesn’t matter as much because, at the end of it all, you reflect and realize just how much you learned about yourself through the process.”